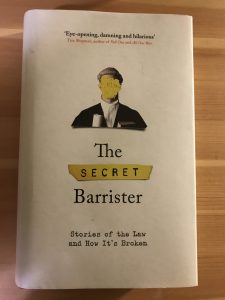 I’m writing this the day that John McCain died in the USA – and the most compelling eulogy came from Barack Obama. It’s a rare day right now when people can disagree fervently with each others views, but still hold each other in greatest respect.

In reading “The Secret Barrister”, you come away with a data filled summary of the comparatively and continued poor state of Westminster politics. Of successive abuses to a system of justice by politicians of all colours. To prioritise “PR” on everything to mask poor financial choices with sound bites, while quietly robbing us all blind of values we hold dear. And i’m sure Chris Grayling will receive few Christmas Cards from members of the judiciary based on their experience of him documented in this books pages.

Politics is but only half the story in this. I often muse to wonder where quality journalism disappeared to? There are good pockets in the London Review of Books, and with the work on the Panama Papers by ICIJ – but where else are the catalogue of abuses systematically documented in a data based, consumable way? Where is the media with the same bite as “World in Action” back on the day? It appears completely AWOL.

One of the really curious things about Westminster is that MPs are required to align to the terms of the “The Code of Conduct for Members of Parliament“. If you go down to item 6, it reads “Members have a general duty to act in the interests of the nation as a whole; and a special duty to their constituents”. Now, tell me how the Whip system works there. On the face of it, it is profoundly against the very code in which our democracy is enshrined.

There appears to be no data source published on the number of votes taken, and whether they were “free” votes or directed to be 1, 2 or 3 line instructions from each whips office. Fundamentally, how many votes taken were allowed to rest on the conscious obligations to be exercised by MPs freely, or to what extent were they compelled like sheep through the voting booths there?

My gut suggests our current government are probably inflicting more divisive whips more often than any UK government in our history, not least as the future interests of our country appear to being driven by a very small proportion of representatives there. The bare complexion of this should be easily apparent from the numbers and some simple comparative graphs – so, who’s keeping count?

Democracy this isn’t. And the lack of quality journalism in the UK is heavily complicit in it’s disappearance.