One of the primary habits of Smart People is apparently that they read a lot and never stop learning! Well, I do too (alongside a lot of content coming off Medium and Podcasts every week as well). Outside of Michael Crichton, Fiction really isn’t my thing (though “The Martian” by Andy Weir got rave reviews, so I bought that and read it on holiday – it was very, very good).

This page is a record of what i’ve actually subjected myself to. 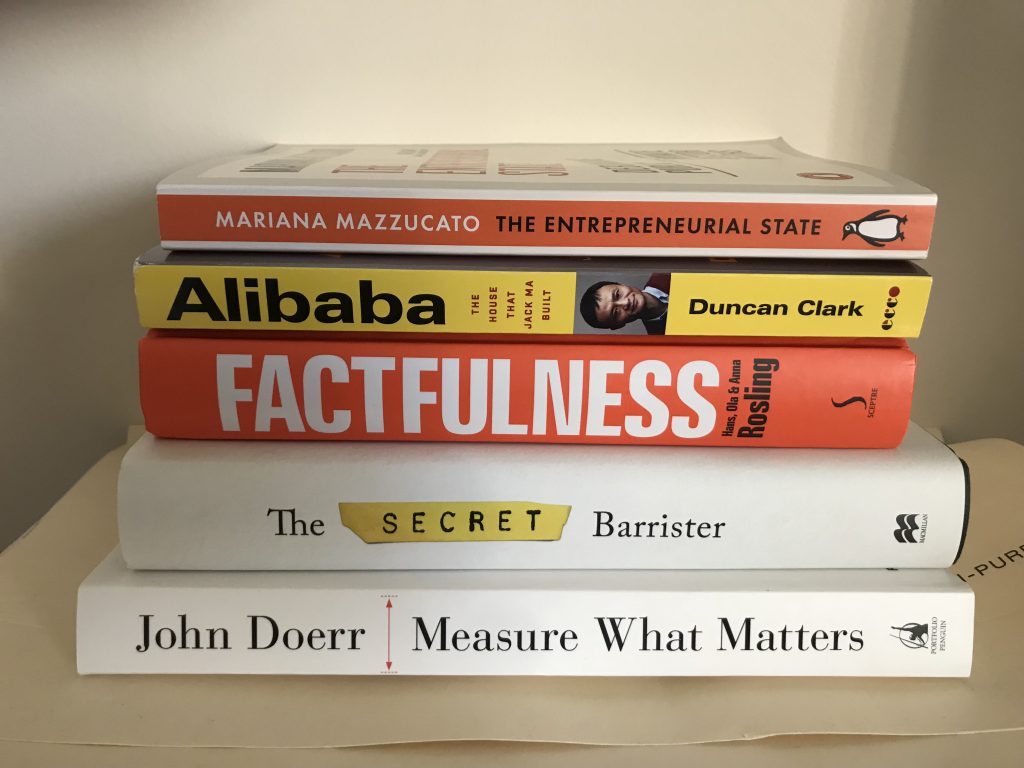 The Entrepreneurial State was recommended on a Tweet by Simon Wardley. It goes a long way to burying the myth that commercial organisations are more effective at delivering projects than those public sector.

Amazon keep growing relentlessly, and i’m almost always impressed by what they do; if there were ever an anti-trust action against them, it’s difficult to imagine a remedy that they’re not imposing on themselves already. One blind spot I have is about Jack Ma and the Chinese variant of Amazon that is Alibaba. I’ve seen plenty of folks reckon they’re both of similar scale and influence, and will at some point represent a clash of the titans. Plenty of other great mobile-led innovation in China (I gravitate to articles about WeChat in my Medium feed), but I have this book to understand more for a context on likely future trading patterns.

Factfulness is a wonderful summary of how the world is getting better; Hans Rosling’s presentations were always a delight when he was alive (and a lot of them are still up on YouTube). It has already explained why newspapers and old media always promote controversy; i’m still working my way through in my work gaps.

The Secret Barrister is another book I learnt about on Twitter. The way the UK government are de-skilling the leading surface of the legal profession (the piece that most folks first come into contact with) is a hidden scandal. Further up the food chain still has my total respect; that’s one thing you really appreciate when you participate in jury service (did my last stint in October 2012).

Measure what matters – John Doerr always had my respect from his early engagement as Google got started (he was their first source of venture capital). I think i’m likely to learn more useful management techniques from him; I hadn’t realised he’d written a book until recently

Historical Hall of Fame
(aka: look which titles I’ve kept for reference in my bookcase). And the Dawn French book isn’t mine!